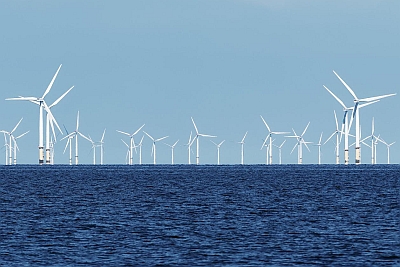 After many years of administrative challenges, the first French MWh of offshore wind electricity was produced in the beginning of June. The Saint-Nazaire offshore wind farm – the very first in France to come into service – will eventually comprise 80 turbines accounting for 480MW of capacity to be progressively installed until the end of the year. Since the first installation in April, 32 turbines have been installed, all within 12 to 20 km off the French coast. This project represents an investment of close to €2billion, developed by EDF Renewables and Maple Power.

Other offshore wind farms are also under construction in the French Atlantic coast. The one in Fécamp (Seine-Maritime) is due to come online in 2023, before those in Saint-Brieuc (Côtes-d'Armor) and Courseulles-sur-Mer (Calvados). In the Mediterranean, another two offshore wind turbine sites are to be built off Port-la-Nouvelle (Aude) and Fos-sur-Mer (Bouches-du-Rhône).

France has projects for development of wind offshore energy comprising a total of 17 GW of installed capacity. Eventually, it is the ambition of the French government to reach 40GW of offshore wind capacity by 2050.